A family farm operation, ANTIQUE ARABIAN STUD, LLC, originated with the search by Linn and Edie Booth for the best endurance horses.  The search lead to Sam Roach and his breeding program of Kingdom of Saudi Arabia imports.  Sons Thomas and Robin grew up with the horses and most of the farm work has been shouldered now by Thomas, also a full time Biology professor at Trinity Valley Community College. Talent of our team increased dramatically when Thomas and Robin met and married Jennifer and Michelle.  Our team now includes a 3rd generation, Miya, Juni, Conor, Grace, and Ernie.  The remarkable endurance asset of the horses is their phenomenal cardio pulmonary performance which was developed over ~ten thousand years by the culling and breeding choices of the Bedouin, achieving the best possible equine for escaping  'ghazu' and surviving the race of death from the pursuing enemy.
The Adventure Begins, Finding IBN TAAMRI
by Edie Booth

Miss Ott would not sell us a horse.  But she mentioned a guy in Canada, who I talked to for a couple of hours, and from that information, knew there was a wild desert son of imports running on a section of land in West Texas.

“Hi, I know you don’t know me, but I am looking for someone who has a wild Arabian stallion running on a section of land with a band of mares, and I have been told that you might know of something like that….”

“Oh Yeah!  That would be Sam Roach.  I can find his number here in a minute.”

I called Sam and shortly set up the very next day to visit and see the stallion, IBN TAAMRI.

We drove out across rough, rocky, brushy land, land on the Clear Fork of the Brazos River, near Eliasville, TX.  Oil pumps are rhythmically chugging along, and pipes lay on top of the ground running to oil storage tanks beside the dirt road.

“There they are,” Sam said.  (We can see a couple of horse heads looking our direction over the horizon about a hundred yards off.)  “I’ll get them to come with feed in the truck.” Sam got out, rattled a bucket and poured it on the tailgate.

The horses come galloping over the rough ground.  The one in the lead was a dark chestnut with a full flowing mane equaled by his full flowing tail.  The others were not eye catching, a thoroughbred mare, a couple of sorrel quarter horse mares, but the lead horse was confident and strong.  He swirled up around the truck ahead of the others, then stopped to get a mouthful of grain at the tailgate.  The quarter horses came puffing up…the stallion was not noticeably breathing.

“It’s hard to tell how tall he is…,” I said.  “He seems very big, quite broad, and strong in the back and hind quarters, but he seemed so much taller and bigger galloping up!  How tall do you think he is?” 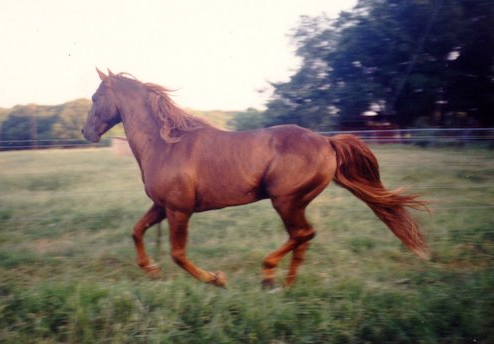 “I guess it is that he is so balanced and moves so easily… fluid movement makes him look bigger when he gallops.”  The horse paused to look steadily at me, the puny two legger who seemed so interested in him.  He could catch my scent… and blew, as though he wanted to sneeze it out forever, this poor representative of man, symbol of control, the captor.  I felt his desert breath from that slight snort, over 6 feet away.

“Wow.  Hot breath of the desert,” I whispered.  I could not take my eyes off him.  His mane and tail matched his deep chestnut color.  There was just a little white on one back foot, and the slightest star on his forehead. After a few more moments absorbing his fluid movement and perfect, muscular body, I glanced at the mares, who had tried to slip in for a few bites of feed stolen from the King.  None was his equal or even close to it, although by most standards they were good enough horses. 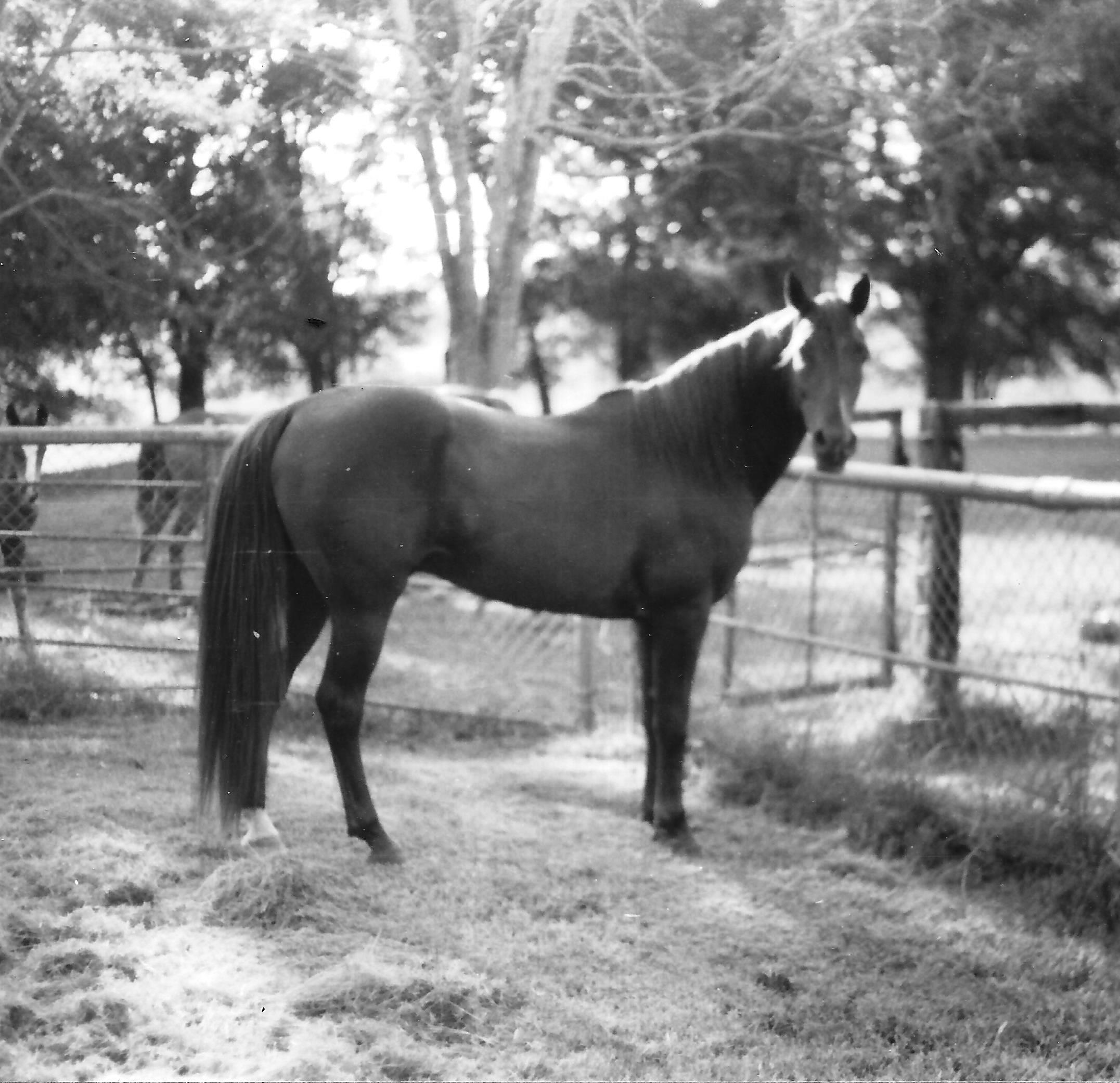 “Oh none of them are here,” Sam answered.  “I don’t have any desert mares.”

“Why not?!?” I exclaimed.  “You should have some quality mares that will carry on the special lines of this horse!  This isn’t … it’s not, well it’s not even ethical to have a horse of this quality and not breed him to mares of his kind!! It’s… it’s immoral, almost criminal!”

Less than a week later Sam and Elizabeth Roach, Linn Booth and I, began a road trip West in search of the remaining mares, the pure descendants of the Saudi Arabian imports.